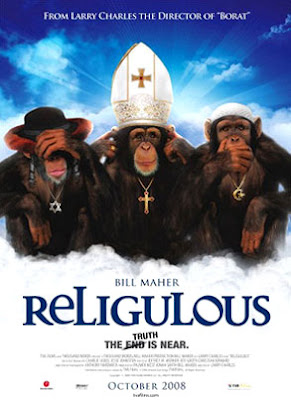 "Movies are not only entertainment but also education" This is what i have been telling people about why i watch billions of movies of all sorts. I have seen low budget movies, short films, movies produced in Greece, India, German, Russia, Spain, Japan, Korea, Mongolia, etc, etc and of course, blockbuster movies.

Though a documentary type of movie like this one? Not so often.

This is a very different, bold, courageous yet risky and funny documentary. I am not going to explain what movie it is here. To get an idea of what this movie is about in Chinese, check this link here - http://hk.movies.yahoo.com/movie.html?id=mcl_religulous

But i want you to know how i feel after watching this documentary.

Bill Maher, the 'main character' of Religulous, has seemingly done a thorough research on the backgrounds of certain religions, Christian (including Catholic in this content), Muslim and Islamic in particular. He criticizes the stupidity of believers of religions and the contradictions of 'stories' and 'miracles' in the holy books such as The Bible & Koran.

Honestly speaking, if i wasn't a Christian myself (i wouldn't say i am solid but that's my belief, no one can move me), i would have been talked into an atheist by Bill Maher's 'evidences' and 'proven figures'. His sarcasm and questions towards clergymen, the priests and ministers (of different religions) have made them all speechless and answerless. And in order to solidify his there-is-no-God belief, he has invited a few well-known experts to back him up.

The style of film is well-controlled. Frequently insert fragments and extracts of other films to complement the dialogues is cool and makes it even funnier. Though i don't think his way of mocking the ministers and making fun of the religions would please a lot of people.

When i was watching it, i took it as a documentary, i did not take it personal. I know Bill Maher just wanted to make fun of the religions that he thinks ridiculous. Though we are all human beings, we are not saints, we all make mistakes in the modern world and the time has changed. Re-think yourself.

I strongly recommend it to Christians, it's a good challenge and see if you could answer any of the questions raised by Bill Maher.
Posted by Lok Chung at 1:13 AM