More Than A Pair of Shoes: Marcus Jordan VS Adidas 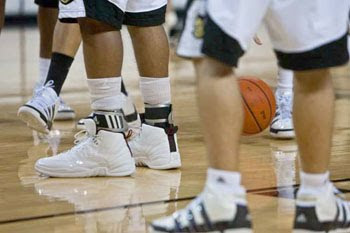 More Than A Pair of Shoes: Marcus Jordan VS Adidas
Posted by Matt Halfhill Nov 9, 2009

Twenty-five years ago a young Michael Jordan was at the center court of controversy following his first games in the NBA. NBA commissioner David Stern “banned” Jordan’s sneakers because they were a “uniform violation” because they didn’t match the shoes worn by the rest of the Chicago Bulls. A quarter century later, Michael Jordan’s son, Marcus Jordan, is at the center of controversy over a similar “uniform violation” in regards to his Air Jordan shoes. While Michael’s shoes caused problems because they were the wrong color, Marcus’ Air Jordans are the wrong brand.

It should be no surprise that Marcus Jordan chooses to wear Air Jordan shoes on court. The shoes hold sentimental value to Marcus, as he grew up watching his father play in Air Jordans. Besides the obvious family connection, Marcus wore Air Jordans en route to winning a State Championship in high school, and probably has more pairs of Air Jordans than executives at Jordan Brand - a subsidiary of Nike formed in 1996. 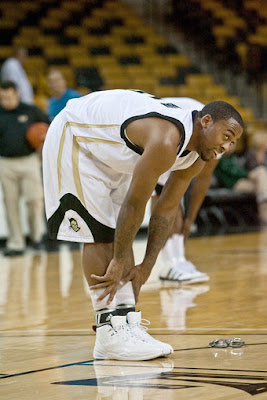 While being recruited by the University of Central Florida, a school with an exclusive Adidas contract for its athletics department, Marcus was promised by UCF coaches that a regional Adidas representative granted special permission for Marcus to wear the shoes In fact , he didn’t sign his letter of intent to play at the University until it was clear there would be no issue in lacing up Jordan-branded sneakers.

Things changed however last week, when Marcus Jordan capped off his all-adidas uniform with a pair of white Air Jordan 12′—the sneakers his father wore when winning his fifth NBA Championship. Even before the final buzzer of the exhibition game, Adidas released a statement that UCF failed to honor its contract and the company would end its relationship with UCF leaving a negotiated six year, $3 Million contract extension out of the question.

Was it necessary for Adidas to terminate its endorsement of an entire program because one athlete playing in Air Jordans? The answer isn’t clear cut in the slightest, and Marcus’ decision to wear his father’s shoes has not come without some negative reaction. On message boards and forums some have criticized Marcus for costing his school millions of dollars and other student athletes the access to apparel, equipment, and footwear. Even through the social media outlet Twitter, Marcus has received negative messages including one who sarcastically stated “What a team player you are…All to wear daddy’s shoes. Pathetic”.

From the other angle, Marcus only agreed to play at UCF after he was promised by UCF coaches that a regional Adidas representative granted permission for him to wear the shoes. Could Adidas have handled the miscommunication between regional representatives and higher ranking officials internally without dropping an entire collegiate athletic program?

In the world of mass media and social networks has Adidas considered the attention that would be generated from its decisions?

The controversy has reached been a talking points on sports networks such as ESPN, headlines with sports business journals, and was even on the front page of Yahoo, but passionate sneaker heads haven’t weighed in on the subject. While we feel that the situation presented a wonderful opportunity for Adidas to show that beyond the leather and rubber that makes up a shoe, sometimes there is greater meaning than what logo is on the tongue, there’s two or three sides to every story.

UCF has actually agreed to solve all the sponsorship issues first before Marcus signed with them. Marcus has already sincerely stated that the Brand means a lot to his family. Imgaine if Michael Jordan was your father, would you wear anything else?

Simply put, family comes first. I got you back, Marcus.
Posted by Lok Chung at 6:10 AM