Just updated my NBA column (in Chinese): http://hk.myblog.yahoo.com/siubox
另外, my boy Patrick Mills (Aussie pride!)將會參加今年既NBA選秀! 以下係Draft Express對佢既一d分析:
Recapping what was learned from 2009 Eurocamp
By Jonathan Givony, for NBA.com. Posted Jun 8 2009 11:26PM
The 2009 Reebok Eurocamp is officially in the books, and NBA teams now move to their next destination: the highly anticipated group workout sessions hosted by the New Jersey Nets.
The Eurocamp served a variety of purposes for all 30 NBA teams in attendance here, which included general managers such as Danny Ainge (Celtics), Steve Kerr (Suns) and Donnie Walsh (Knicks). NBA coaches such as Mike D'Antoni (Knicks) and Jay Triano (Raptors) and dozens of other scouts were also in attendance.
DraftExpress Eurocamp All-First Team 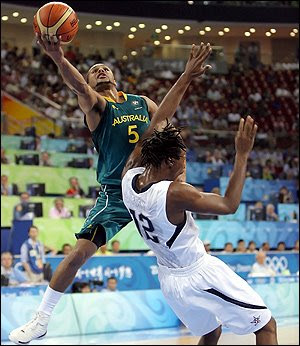 Point Guard: Patrick Mills, 6-foot-1, Australia, Mills may have been a bit inconsistent in terms of his playmaking skills and perimeter shooting, but he left a strong impression with his blazing speed, terrific ball-handling skills and excellent mid-range game, which had some teams comparing him to Aaron Brooks. Mills likely stays in the Draft now, and could be a solid pick late in the first round or early in the second.
Source: Jonathan Givony is President and Director of Scouting of Draft Express. The opinions expressed in this column are solely those of the writer.
Posted by Lok Chung at 12:04 AM