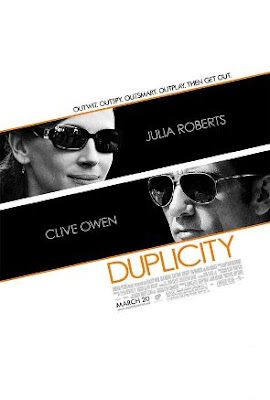 The Captain unusually had a little bit a availability today and was wandering in a shopping mall. Downstairs was a nicely renovated cinema, The Captain went down to have a look at the movie schedule, saw 'Duplicity' featuring Julia Roberts and Clive Owen, and he was thinking, 'oh well, since i haven't seen a movie on my own in ages...' Checked the time, good fit of his schedule, then headed to the cashier and bought a ticket.

Summary: 'Duplicity' talks about 2 corporate spies try to set up a con that will ultimately and eventually lead them to enjoyable and luxurious lifestyles, yet are being played instead. The romantic storyline between Julia Roberts and Clive Owen is well planned.

The following is a comment by 'Shek Kei' from Yahoo! Movies (HK).

The director of this film, Tony Gilroy, has a tremendous background of writting and directing cops-crime, investigation and adventure thrillers such as State of Play (by Russell Crowe, one of the most-wanted-to-see films that i have not seen), Michael Clayton, The Bourne Trilogy and Bait.

Veteran actor Denis O'Hare's versatality of acting has definitely added some extra colors to this film.

There was one scene that had 4 squares showing different places with Julia Roberts's face on the right hand side of one square (she was pissed off after an interrogation with the female staff of B & R Travel), and there was another square showing a metal/bronze lion in London on the right hand side of the square. I guess the director tried to put these 2 pictures together and to show 'at that very moment, Julia was like a lion, she could eat anyone off when she is angry'. It was a very good scene.

I give this film a 7 out of 10 because it is not a new idea, kind of reminds me of 'Mr. & Mrs. Smith'. But i need to give some props to the film music composer - James Newton Howard. I really enjoyed the music in Duplicity, put in at the right time and the best time, very fitting and classical, which match the themes very well.

I just did a little research on him and geez, he has done loads of great jobs of composing for Awards-winning movies such as The Dark Knight, I Am Legend and Blood Diamond.

Let me know what you think of the movie.
Posted by Lok Chung at 12:12 PM